The Joy of Poison Oak…and the steriods that follow

Since this is a blog mostly about hiking, and since hiking entails interaction with poisonous plants, and since my not-so-recent run in with one particular poisonous plant resulted in me being on prednisone GOING ON 4 WEEKS NOW, I thought a mini tutorial on poison oak and some of the side effects of the medications would be appropriate.

Poison oak is found on the west coast, and poison ivy on the east.  You get it from coming into contact with a chemical called urushiol (same for both plants).  You don’t spread it by scratching (unless the oil gets under your nails, which it can) and other people can’t get it by touching your nasty-ass rash (though I don’t know why anyone would ever do that), they have to come into contact with the resin itself.  If you are looking to avoid all contact, poison oak comes in the form of a: bush, vine, root, tree, stick, leaf…so really you just need to stay away from any kind of shrubbery.

With that problem solved, we move on to treatment.  After the oozy rash, sleepless nights, and looks of horror from your friends when you bare your skin (which is probably the best part of the whole experience), when you finally go to the doctor, come the steroids.  Big suggestion: MAKE SURE you are on them for long enough.  Because apparently even if it totally looks like you are healing, if the first round doesn’t completely knock it out, the rash will come back with a vengeance.

As the doctor was writing out my (third) prescription of prednisone, she finally told me that she doesn’t like putting people on this drug for a number of reasons.  Apparently it is one of the few drugs that isn’t addictive, but still makes your body stop producing some hormone or chemical or something, so if you stop taking it without properly tapering you experience withdrawal symptoms (and sometimes even with tapering you experience the symptoms).  Awesome.  Additional side effects include:

It reminded me of the time after my accident when the doctor decided to switch me from one anti-seizure medication to another, telling me after the fact that one of the reasons he switched me over was that side effects for the first medication I was on included gum enlargement and facial hair.

So, to summarize, if you get poison oak:

For more answers to your questions on poison oak, this site is helpful.

I AM HEALED!!   We have a few hikes on the docket this week, so get ready… 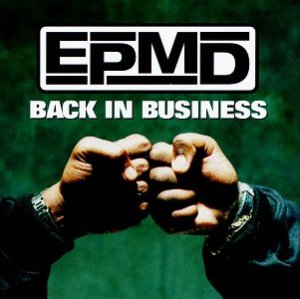 So that “rapidly escalating” case of poison oak from the second Mt. Tam hike has spread to my leg, side, and back, and is now a full-blown skin infection (I know, disgusting…that phrase comes in a (distant) second to mucus plug for words that should never be next to each other.)   I am on steroids,  antibiotics, benedryl…blah blah…anyway, point being, wearing clothes and walking really irritates everything.  My condition has already postponed two scheduled urban hikes…so we are officially on hold until further notice.  (This is especially disappointing because the past 10 days have been Beer Week in San Francisco, so we missed out on some awesome microbrews and presentations and tastings.)  Oh well. 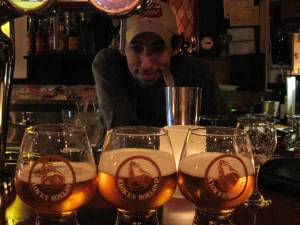 Because she is such a good friend, Molly will be guest blogging to cover a few hikes that I was scheduled to participate in but couldn’t attend.   MOLLY ROCKS

While spending the weekend in Santa Cruz with Emily and Ashley, two of my closest friends from high school, I figured it might be a good time to knock out a hike in the area.  Despite a rapidly escalating case of poison oak, I figured a short, flat stroll outdoors on wide, paved roads, far away from any questionable foliage with some old friends might be a nice way to spend the weekend. 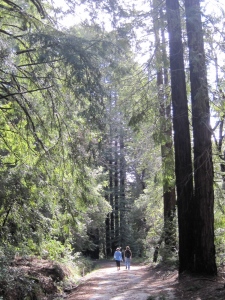 Not entirely what happened.  It would be misleading to say we did this hike as described in the book.  We definitely went hiking in the Henry Cowell Redwood State Park, but our hike was 8 miles (not 4), the grade was pretty steep in some areas (not “steady and mostly downhill”), we never made it to the observation deck (despite convincing ourselves that we had), and half the time the river was on our left when it should have been on our right.

How did this happen? There are many theories.  Ashley blamed the book.  Emily blamed the guide (me).  I kind of blamed Ashley, because I was under the impression that she had done the hike before (sorry Ash) and because I lacked any other defensible rationale for our situation.

About 10 minutes into the hike we (read: I) reference the book and see that, though we have apparently walked the right distance and are in the right location, the river is on our left instead of our right.  So we are walking the wrong direction.  Weird. 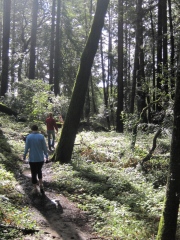 Oh, well…we turn around and continue walking another mile or two following what we believe is the right trail despite the fact that we a.) are not seeing any white, sandy trails as described in the book (we blame the rain and mud and point to some white rocks on the side of the trail…”yeah, see?  there’s the white sand!”), b.) have yet to see the name of the trail we are supposed to be walking along on any trailhead post (we blame the book/trailheads being outdated),  and c.) had long since passedthe mileage marker for the observation deck according to Emily’s pedometer.

Almost 3 miles in we come across a small clearing with a bench that looks out over the valley all the way down to Santa Cruz.  “The observation deck!” we cry, wanting so badly to believe we are going the right way that we ignore the fact that there is absolutely no deck whatsoever near these benches, no “360 view” of Santa Cruz, and that there is a hill rising up behind us when the book says this deck is located on the highest summit in the area. 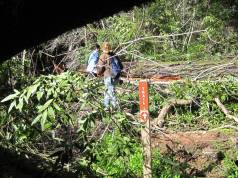 From here things became even less logical…we decided to take a detour (some people were getting bored with the paved road) and, going off of our location on the map (which wasn’t our real location at all), start down a muddy hill towards the river, thinking it would take us back to the car.  Wrong.  Dead ends into fallen trees and the rushing river.  There are beware of mountain lion signs everywhere, which has Emily nervous.  I pick up a big stick and start swinging it around to protect us as we walk.  Back up the hill.   Back to the fireroad which takes us to…a major thoroughfare, where a nice gentleman shows us that we have actually strayed so far south that we are now off the map entirely.

Long story short (too late), 5 miles later we made it back to the car.

Lessons learned: don’t give me the map

Flora and Fauna: blackberry bush (which I kept confusing with poison oak)

This is no longer my favorite hike.  And my love for Mt Tam is waning.

Lesson learned: BE AWARE of nearby plants when peeing in the forest

You are currently browsing entries tagged with Poison Oak at Rambulatory Ambulatory.