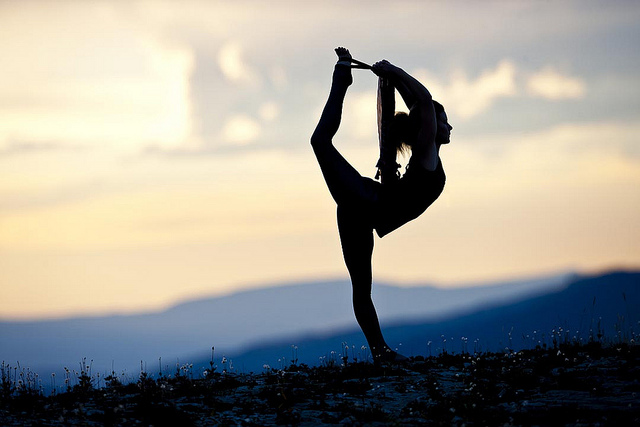 I’ve now had my Pocket Yoga app for a month.  Initially I tried to do it every morning, but work got so busy that even waking up at 5 didn’t give me enough time.  So morning yoga has only been happening occasionally.

That being said, a few learnings from the mornings that I have been able to squeeze in a little down dog:

photo: me perfecting my arrow in a grassy field.
did you even believe that for a second?  via

Being back in California has been great.  Adjusting to this new life of part-time daycare, working from home, Paul always gone: less great.  I’ve struggled to get into a groove and spent a lot of the past four months feeling exceptionally tired and stressed, like I was spinning my wheels.

I’ve never been big on New Years resolutions, but there is something nice about the beginning of a new year and a clean start.  So I decided to step back and evaluate: what can I change?  Starting from the top…of the day.

Mornings, to me, have always set the tone for the rest of the day.  They are also one of the few windows during which I have time to myself.  And I get to choose how to use it.

In 2014 Paul started his intern year, and I started actually adhering to my own rule about not running in the dark alone (especially with a kid in tow).  This threw a monkey wrench into my previous schedule of early morning runs or swims.

So instead, I’ve been getting up around the time that Paul walks out the front door (at 4:45…yes, seriously, sucks to be him) and squeezing in some work before the Kraken arises. 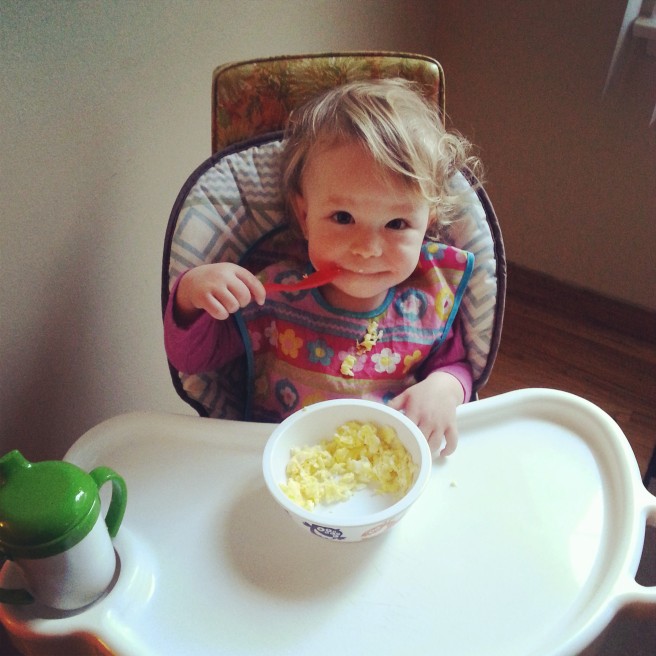 It’s great because I get work done.  It sucks because by 7am I feel lazy and drained, have already spent over 2 hours staring at a screen, had 2 cups of coffee, and am usually still in my PJs.  Apparently 20 years of voluntarily subjecting myself to various forms of physical and psychological torture before the sun comes up is a special kind of masochistic behavior that is hard to de-program. Because slow mornings make me feel lethargic and crappy and like I want to go back to bed.  All day long.

So I started there.  I decided to change my mornings.

Despite my contentious history with Lululemon, I’ve loved doing yoga the past few years (WHATTUP PEACOCK).  But I cannot afford to pay $15 per yoga class right now.

As someone who still can’t touch her toes, I’ve always been skeptical abut the value I would derive from instructional yoga DVDs.  But I decided if I was serious about this then I had to risk it.  So I sucked it up and spent $3 on the Pocket Yoga app.  Five different types of workouts, three options for duration, difficulty, and environment for each.  Good place to start.

My father has been on my case for years…YEARS (like almost a decade)…about meditating.  I know it wouldn’t hurt to slow down and be more mindful.  I also know that as soon as someone tells me I need to do something for my own good, I will refuse to do that thing. 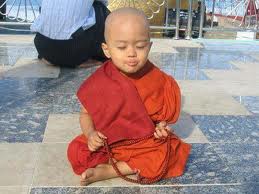 After 7 years my father finally gave up on trying to convince me to meditate, so I finally started to seriously consider it.  But every time I actually tried to sit down and do it I had trouble starting.

Enter Headspace: the super hot meditation app that everyone and their mother is talking about.  10 minutes of guided meditation first thing in the morning.  Turns out the guidance, for me, is very helpful.  I’m still on the 10 day free trial, so we’ll see if I’m ready to buck up and pay money by the end of this.

SO!  New morning routine, as of last week:

It’s not the normal cardio extravaganza that I’m used to, the risk that she will wake up and I won’t be able to do a complete yoga sesh exists (and has happened once), and I realize that an n of 7 is too low to reach any sort of real conclusion, but so far my days have been better.  I’m diggin it.

February Fitness was largely spent doing the above.  That’s really all there is to it.  But here are my monthly totals anyway:

Yoga: 4 hours + two semi-successful peacocks (I am temporarily suspended from attending my normal yoga class and have been trying to find a reasonable alternative, but that’s another story for another time)

Geesh. Not really a ramp up from what I normally do, but…whatevs.

I cut 2 of my longer runs short this month due to feeling less than stellar.  Even so, not too worried about the half marathon.  But I did walk to work a whole bunch of times (4 miles round trip), which maybe might count for something sort of.

BUT!!  To counter all of this, one of my masters swimmers broke 100K yards of swimming this month, so I will take that as a personal victory (this guy would literally come to the pool 6 days a week and swim up to 7K BY HIMSELF.  what.)

I’ve been doing a lot of yoga lately.  I like it for a few reasons:

There is only one class I really find challenging and worthwhile.  I love it.  And not just because the teacher, who is most definitely stoned all the time, plays music during class and every time a Grateful Dead song comes on walks by me and goes, “Hey, California!”

There is one drawback: his favorite pose is this thing called peacock.

That is peacock.  And, like most yoga poses, no, I have no idea how that resembles a peacock. At all.  And yes, it’s as ridiculous as it looks.   But he makes us try it every. single. day.

I’ve been attending this class regularly for about a year and a half.  That’s a lot of unsuccessful peacock.

The first year or so I mostly just worked on getting my fingers pointing towards my feet with my elbows and forearms touching under my belly, with my legs still on the ground (hard to do with my gimp elbow.)  That took a while.

Once I mastered just getting my hands in that position, next was me putting any weight at all on my hands.  This usually lasted about .0003 seconds before I face planted into the floor.  Over and over.  Until I gave up and just laid there, face down, defeated.

Last week I was doing my usual flopping around, doing my best to look like I was actually trying so the teacher wouldn’t come over and pay attention to me, and suddenly…my legs were off the floor.  Like magic.  Not up high in the air, like the dude up there, but OFF THE FLOOR.  I WAS FLYING.

…and then I promptly did something weird to my shoulder and had to take the week off.

And that, my friends, is my February Fitness success story.