Got back yesterday from the first awesome trip I’ve taken for work (besides Harlan, Kentucky): SXSW (just the multimedia/tech part, not the music.)

It was in the 70s and sunny, there were tacos and BBQ, some of the talks were really, really awesome (Elon Musk, Tina Eisenberg, Joe Peacock, Matthew Inman…) and they showed us some pretty awesome stuff (like this), and one company had bananas you could play Ode To Joy on like a piano (you just touched the banana and it played a note.)  I mean really, what more could you ask for.

Guess what my favorite food truck was.

The only problem was I left Paul alone for almost a whole week with the farm.  Glad to report there were no casualties.

And now that I’m back from a week of BBQ and tacos and no exercise…tomorrow I am off to NYC!!  3 hour half marathon here I come. 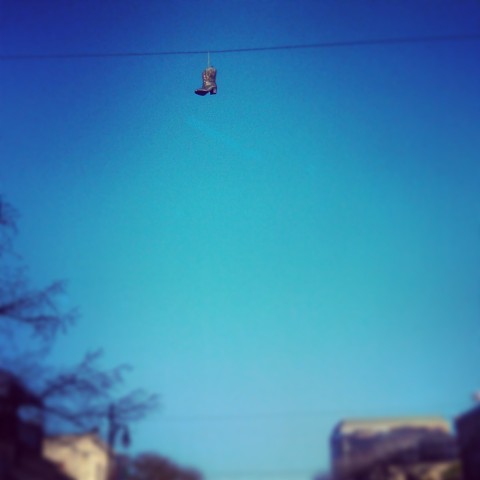 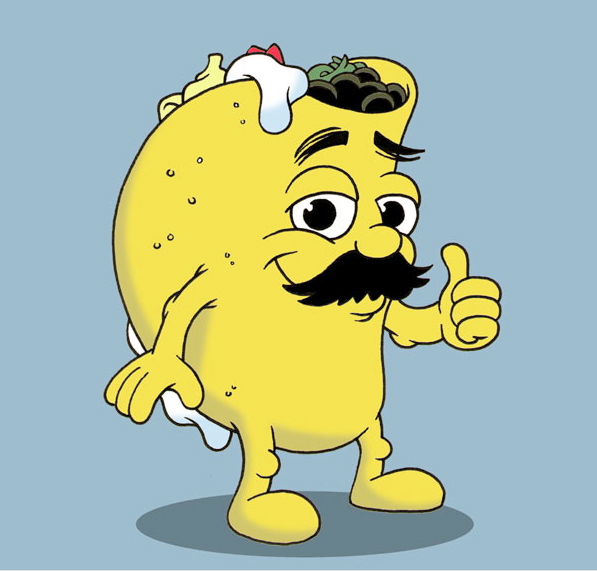 With 9 people joining, this was our biggest hike to date.  So to start off, I would like to thank everyone who joined and made it the raging, colon-cleansing success that it was.

First, some taco facts are in order:

Our hike took us from the Western Addition to Upper Haight and down to the Mission (where we did most of our taqueria-ing.)  There were a few rules:

First stop: Papalote on Fulton.  Known for it’s burritos (not tacos) and tofu (obviously a higher-end taqueria), we decided to give the marinated tofu taco a try.  Coupled with a few Coronas it was a nice, light, tangy intro to the night. Salsa at Papalote takes the cake, you can put it on anything.

From there we headed to El Balazo on upper Haight.  Happy to find it up and running after hearing about the raids a few years ago, we really enjoyed the decor.  The chile verde taco was pretty good with a nice kick to it, but the carne asada taco fell a little short with sub-par meat.  Cabbage salad there gets two thumbs up. 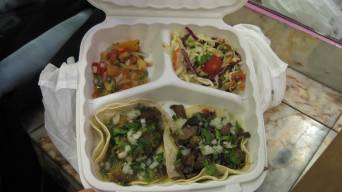 So, with 2 tacos down, next on the list we were scheduled to meet Ferg at Little Chihuahua on Divisadero at 7:30…almost a mile away.  Time: 7:15.  Onward and upward!

After a brisk hike/light jog over to Divis, we met up with Ferg and found Little Chihuahua…completely packed.  La Taqueria, a must-visit on our hike, was still 2.5 miles away and closed at 9pm.   It was kind of a long way to go without further sustenance, but since we were feeling a little crunched for time we decided to skip Chihuahua and go the distance in one fell swoop.

So we booked it allllll the way down to the Mission (over 2 and a half miles) and got to La Taq at 8:20 where we met up with Summer, Ryan, and Mike and ordered….TACOS DELICIOSOS!  (And one burrito…dammit Mike).

Ryan and Summer introduced us to the crispy tacos, which I now highly recommend.  Words overheard: tendermoist; overstuffed; more bang for your buck; perfectly crispy; delightful.

After getting booted from La Taq at 9pm, we walked a few doors down (literally) to El Farolito.  The super popular taqueria was packed, per usual, so we decided to check out El Farolito bar next door.  Turns out, the bar isn’t quite as hot a hangout for hipsters or English speakers.  AND, apparently top secret info, you can order food from the taqueria at the bar!  Genius. 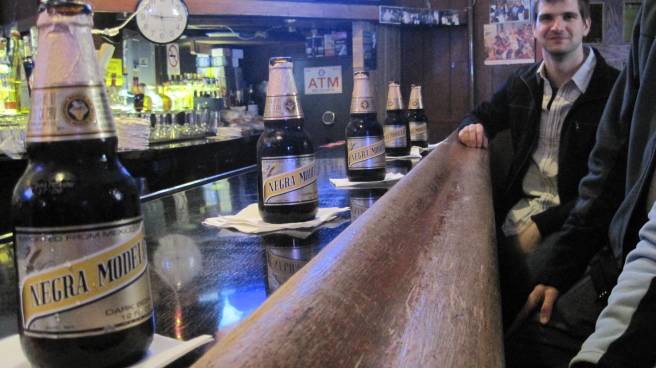 That aside, additional reasons El Farolito completely rocked include (but are not limited to):

And, according to Summer, the veggie tacos here beat out the ones at La Taq.  It was hard to leave. But after we finished our tacos and jalapenos and beers and tequila (and after Summer, Molly, and I got hugs and kisses from the old dudes sitting by the front door), we did.

Feeling pretty stuffed from our one-two taco punch, we headed down the street and ran into our first…BACON WRAPPED HOT DOG CART!  Rules are rules.  Down the hatch.

Really stuffed at this point, we continued our walk along Mission when out jumped…ANOTHER BWHDC!   Ryan, always a stickler for rules, got another one.  The rest of us opted out.  Rules are made to be broken.

We needed to get off of Mission immediately to avoid another hot dog sneak attack, so we veered into Doc’s Clock for a beer.  Unable to finish his hot dog before we went in, Ryan put it in his pocket to keep it warm.

After a beer at Docs everyone was feeling pretty disgusting…but we had one taqueria left on the list.  We made our way up Mission when, half a block in, I heard a shriek.  Hidden behind a post on our side of the street…a third bacon wrapped hot dog cart.  And Ryan, who had just finished the second one from his pocket, was buying one (but this one with no mayo). 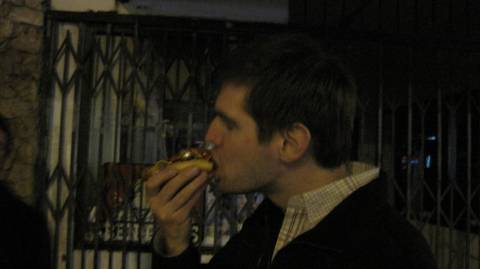 We made it to our final stop, Taqueria los Coyotes where we finally met up with Jesse and Tierney and one girl who thought Los Coyotes was a great place for a nap.

Watch out for the habanera sauce. 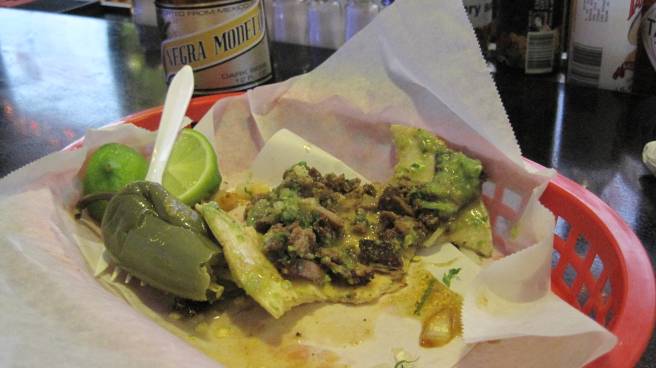 Lessons Learned: get the crispy tacos at La Taq; meat sweats are not just an urban myth