Have you watched Jessica Jones on Netflix?  It’s based on a Marvel Comic, characters include an alcoholic PI who has superstrength and can lift cars and jump over buildings, a villain who can control minds and goes around making people kill each other in gruesome ways, and a man with indestructible skin.

In Season One there is a scene in which the villain decides he wants to move into a two-bedroom suburban house, so he goes and tells the owner to move out within 24 hours (which, of course, the owner does, because mind control).  And 24 hours later the villain moves into the huge, newly vacant house.

Over the past week I kept thinking about that scene when he walks into the empty, perfectly clean house.  It is the most unrealistic scene in the entire series.

Moving always sucks.  Moving with a two year old and an infant, in torrential rain, when everyone is puking and having serious GI problems is…yeah.  It took us over a week to clean everything out and get everything in.  And almost a month to recover.

It wasn’t pretty, but we made it.  And our new place, though tiny, is 5 blocks from the beach and pretty fantastic. 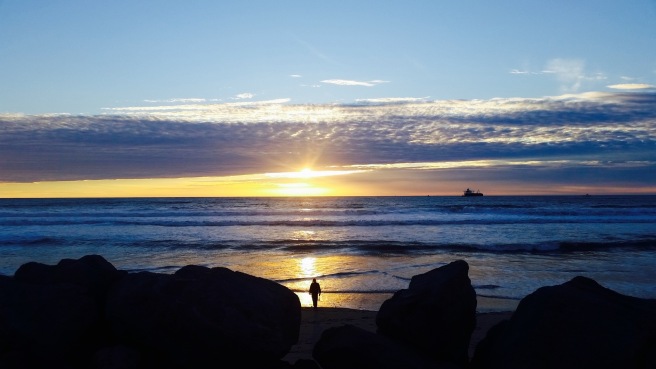 Little Eazy-E was a champ on the flight home. 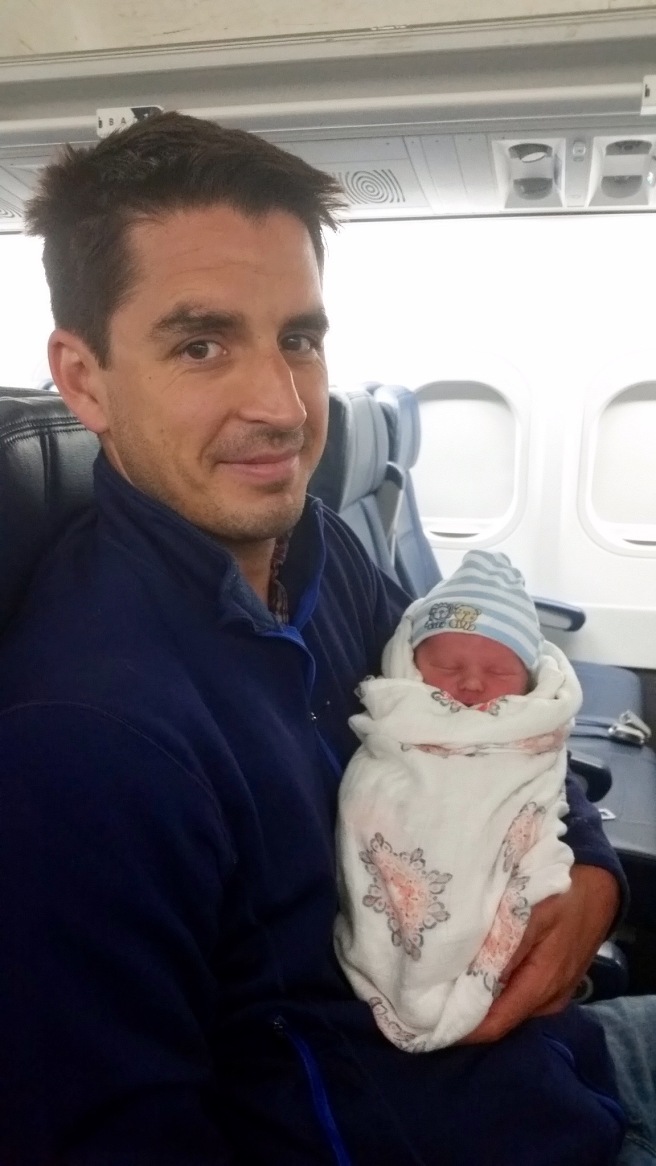 If anyone looks like he could use some help it’s Dad.

HH will not let him go, to the point that it’s kind of an issue.  He can’t be in the room without her wanting to feed him or hug him or put a blanket on him or honk his nose.  But better that than the alternative.  She is honestly so happy to have her brother here.

Not sure if the feeling is reciprocated.  (And her hair.  Seriously.)

Paul is already back at work, and we’re just adjusting to life with a +1.  More to come later. 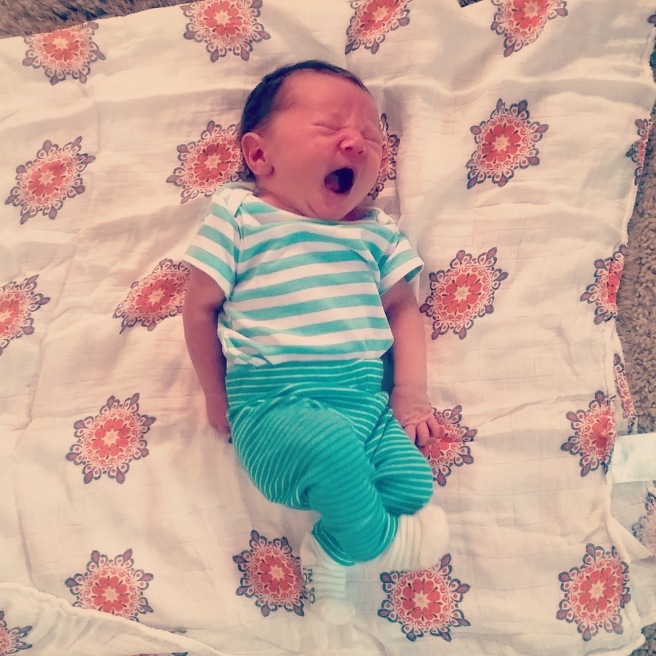 Paul was home this weekend.  And life got like 4 bijillion times better.

I know correlation doesn’t always imply causality, but this weekend I became sane and HH slept through the night.  So that was miraculous and glorious.  It was also the first lazy weekend morning I’ve had in forever…even though we were up riding our trikes at 7am.

Paul also downloaded a free doodling iPad app for HH called DooDoo Lite, and spent the whole weekend talking to HH about making doodoos. But I actually got to spend some time BY MYSELF and finished Season 5 of the Good Wife, so he could have been teaching her how to juggle knives, I didn’t care.

Now it’s Monday, back at the grind.  But I feel rejuvenated and ready to tackle whatever comes at me.  Even this.

I wasn’t totally wrong.  Sometimes you do just have to hang in there a little longer.

peppers peppers everywhere!  Our garden is exploding with peppers.  I don’t know if you can tell, but this misshapen (?) “sweet bell pepper” is HUGE, like the size of my hand.  It was pulling the whole tiny little plant over.

…and our red bell pepper, which is green…

…and two huge Anaheim peppers.  And our tomato plants are (literally) 5 feet tall. 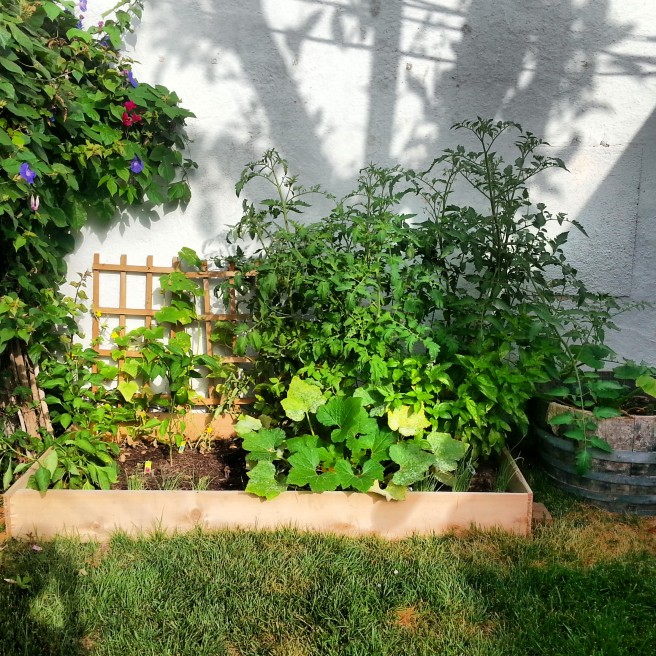 I have to go find a stake to hold them up, they are so big they’re pulling the cages out of the ground and taking over the entire garden box.  Out of control.

I also came home to some mild disarray.  The fridge was barren, the garden more or less ignored, things had been put in the wrong place.  (For the record, I’m not knocking Paul at all. He’s working 13 hour shifts and flipping back and forth between nights and days, I don’t expect him to come home and worry about which cupboard the blue bowls go in.  I’m impressed they made it into any cupboard at all.)

So this Sunday morning I woke up at 6 and got to work.  I fed the baby and cleaned the kitchen and tended the garden and did 3 loads of laundry and put the dishes back where they belong.  I unpacked, cleaned our bedroom, folded clothes, made some fresh hummingbird nectar and hung up the feeder so I can watch them out the front window while I do work.  All before 8:30am.  Humming the whole time I did it.  I like putting things where they belong, having a clean house and a neat, productive garden and a kitchen that smells like something delicious baking.  I don’t just endure making these things happen, I LIKE it.

Time out.  Hold on.  What is happening here.  Is…is this middle age?  Is this how it happens?  Gradually, your life becomes so mundane that you look forward to mopping the kitchen floor and begin using phrases like “tend the garden”?  Is this how it starts?  Oh my god, am I a boring mom?  Is this how it all goes down??

Do you see?  Do you see how that just happens?  Can you fight it?  Is there any going back?

It may be time for a dramatic re-evaluation of my life trajectory.  But until then (and because it’s time-sensitive), there are some overripe bananas that were neglected this week sitting in our kitchen that need to be made into banana bread.

This week has been pretty ridiculously busy, and I’ve spent a lot of it being Cranky McCranksterpants.  So it’s probably best I didn’t do any sort of commentary.  Last week, though, was amazing.

Started out flying into LA and renting the cheapest car possible:

Fiat 500.  Booyah.  Every time we saw another one the driver would give us a thumbs up.

First up was a 20-hour trip to SD, where I visited my old friend Jen.  We hit up Comic Con… 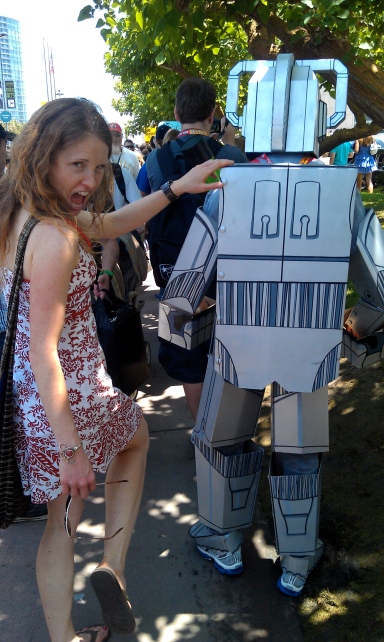 …and ended the night at a gay bar with everyone was dressed like superheroes with inflatable flamingos everywhere.  There was some carnage the next morning. 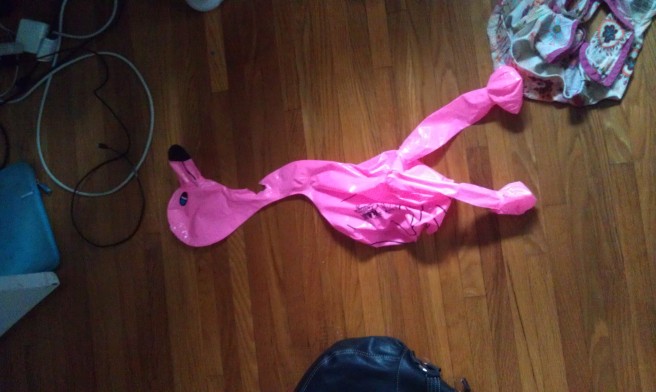 After that it was up the coast to Santa Barbara 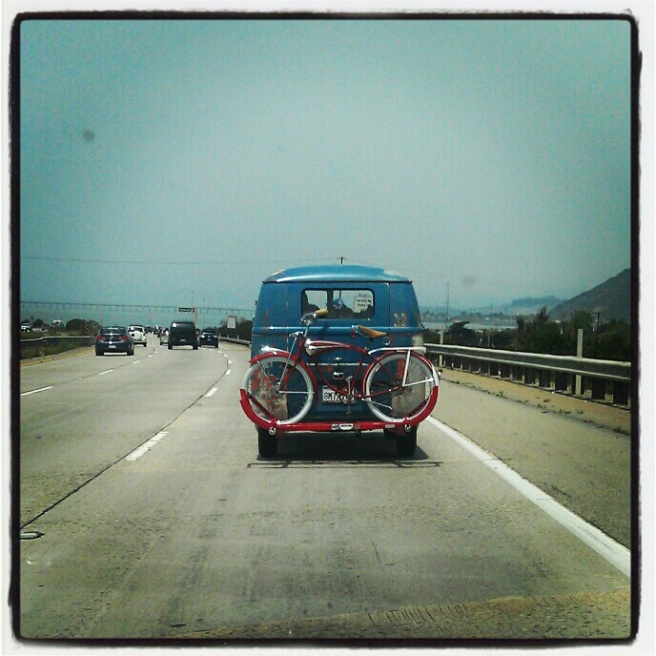 where we ate some good produce from my parents yard

and binged on Blenders and burritos.  Lots and lots of burritos.

There was also Red Rock

It was a pretty fantastic week of relaxation and sun.

Then it was up the coast again to Carmel for a really spectacular wedding.

Instead of a traditional rehearsal dinner, Alix and Christian threw a rock legends party where everyone had to dress up like rock stars.

The wedding itself was out on a reserve 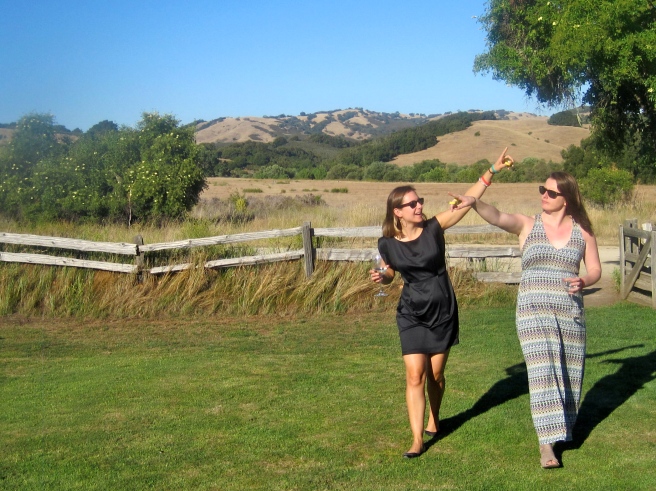 and the reception was held in a barn. 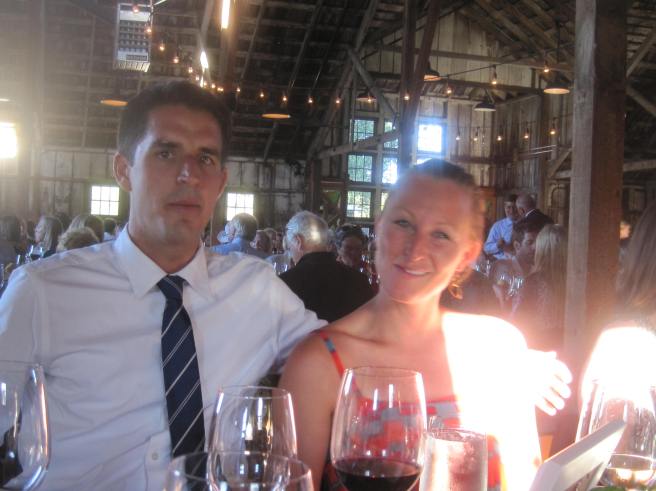 Alix and Christian run the Lazy Parrot CSA, and our tables had basil plants and all sorts of fresh produce to make our own bruschetta.  That was awesome.  As was the dance floor. 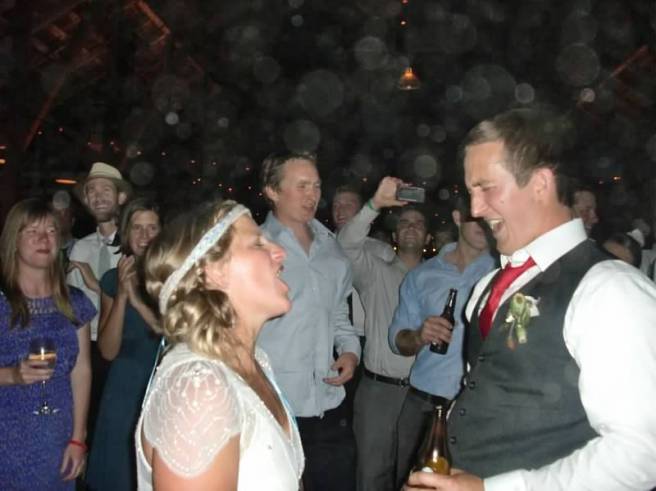 It was a spectacular weekend.  The next morning we drove up the coast a little further to SF, which isn’t a bad place to recover with friends and fish tacos. 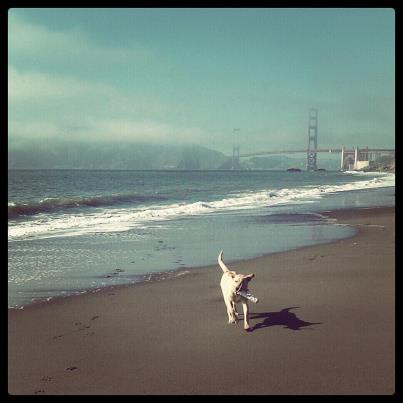 Then the red-eye back to Kentucky and right into the week from hell (OK, it wasn’t that bad, but it was busy.)  I’m still exhausted.  And tomorrow, assuming the weather mellows out, I’m on another flight solo out to DC for Kristin’s 30th.

But for now, enjoy the picture from our front porch tonight before the deluge began.

When we were in SF, one of the stipulations for moving to Kentucky was that we would get a pig…pretty much because it sounded awesome.  We talked about our pig a lot and even gave it a name (Bikini). Unfortunately, things didn’t pan out the way we anticipated and because we are renting and have no plans to move, Bikini is now, for all intents and purposes, out of the picture.

Last spring Paul got really amped about an alternative:

And though it took a while to come to fruition, over the holiday break Paul decided to use his brother’s master architecture skills and build a coop.  He’s convinced we can train the dog not to chase or eat the chickens.

So here it is: the Chicken Coop.

We used Spike’s old dog house (which he went inside exactly once) as a separated area inside for them to have their nests for laying.   Complete with easy-access hatch to remove the eggs. 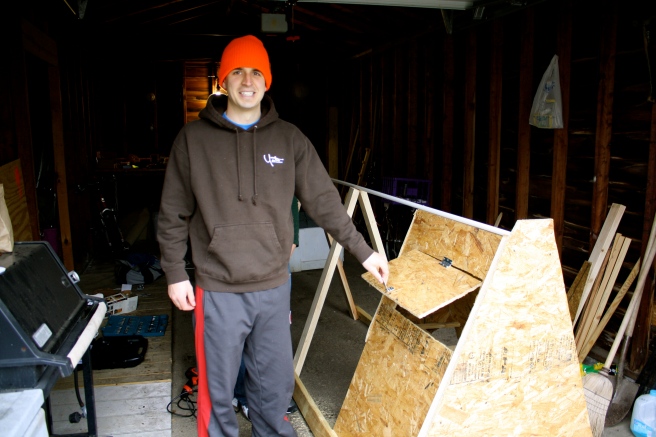 To be completely honest, Paul’s outfit aside, I was really impressed.  It’s like a chicken mansion.  I’m not sure the chickens will understand what they’re supposed to do where, but Paul did the research and is pretty confident.  So I guess we’ll find out.

Next up: the chickens.  Probably in the spring.

As much as I enjoyed the trip to California, it is always nice to come home. Unfortunately, that also meant 18 degree weather and short, dark days. 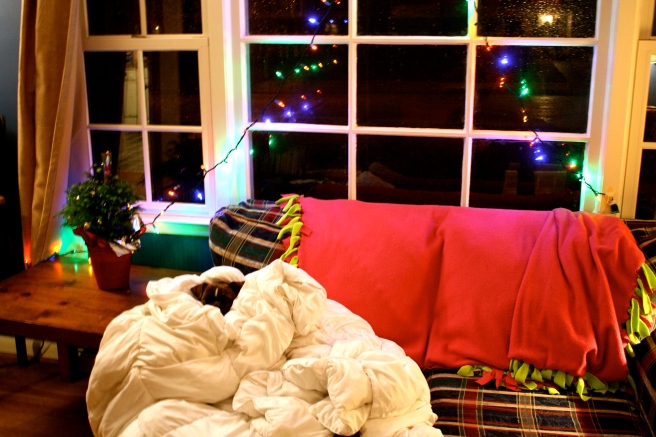 Yup, that’s pretty much all anybody wants to do.

Paul spent the break snowboarding up in the Canadian wilderness with his friend Ollie (like really, in the middle of nowhere) where he and his brother hunt their own meat and build their own shelter and stuff like that.  He brought this book back with him: 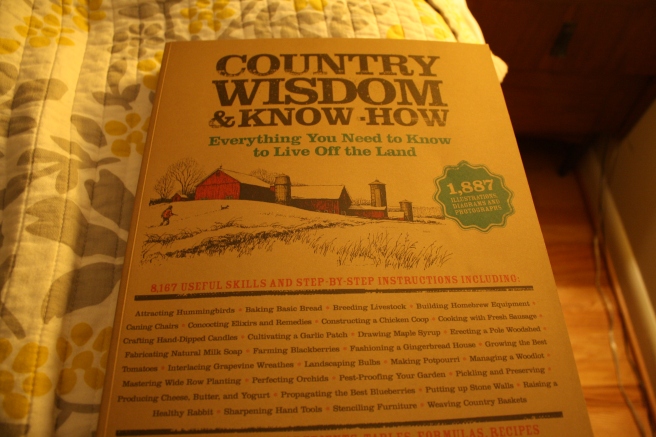 Big eye roll.  We live in a neighborhood, not in the wilderness or on a farm in the country (despite what our Christmas card suggests…that picture was taken in our backyard.)   We don’t own a large plot of farming land or cattle.  We are not survivalists.  This book does not apply to us.

But after a day of being home of doing absolutely nothing productive, I decided to crawl out from under my comforter on the couch and see what was in the book anyway.

Last week I helped (watched) Chrissy make some bomb bread in her apartment in SF.  Inspired, I found a bread recipe (there are many) in the book and decided to give it a try. 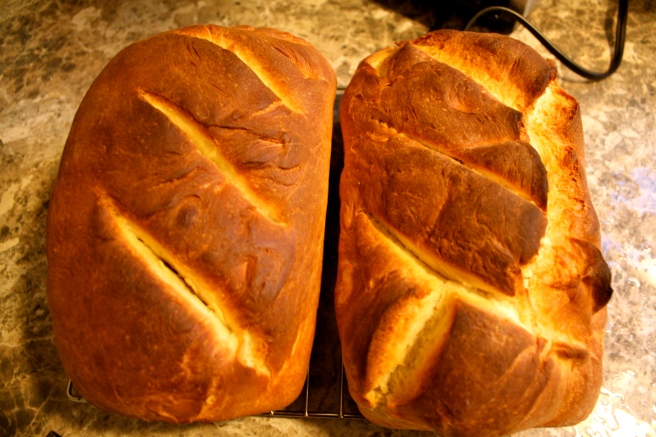 Boom.  Different recipe than Chrissy’s, totally different type of bread, but still good.  Plus baking it warms the house up and makes it smell yeastily delicious, which is especially wonderful on dark wintery days.

And that book?  I was wrong.  It’s awesome.  It has everything–cooking, gardening, raising animals, making clothes, making preserves (Paul is stoked about that), how to skin a rabbit, home repairs, herbal remedies, diarrhea relief for your dog (seriously)…watch out.

We were supposed to head to Baltimore this beautiful fall weekend to see my sister and Joe and go for a mudrun, but med school tightened its death grip and we stayed here.  And did uneventful things.  Hence the boring post. 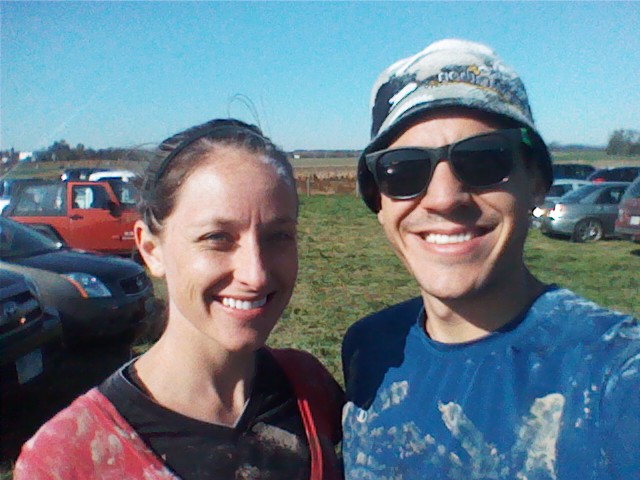 {tomatoes in the backyard… still hanging in there} 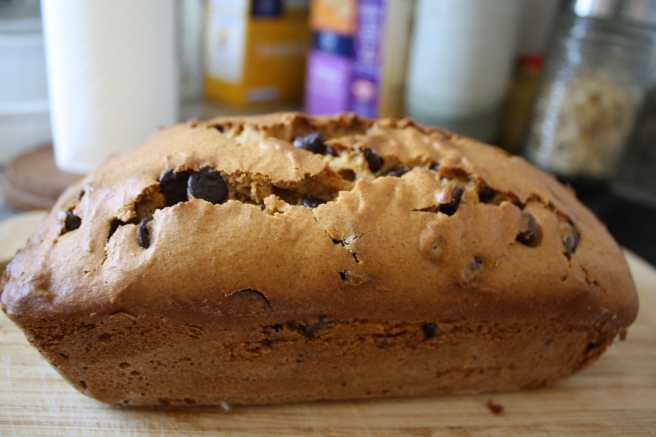 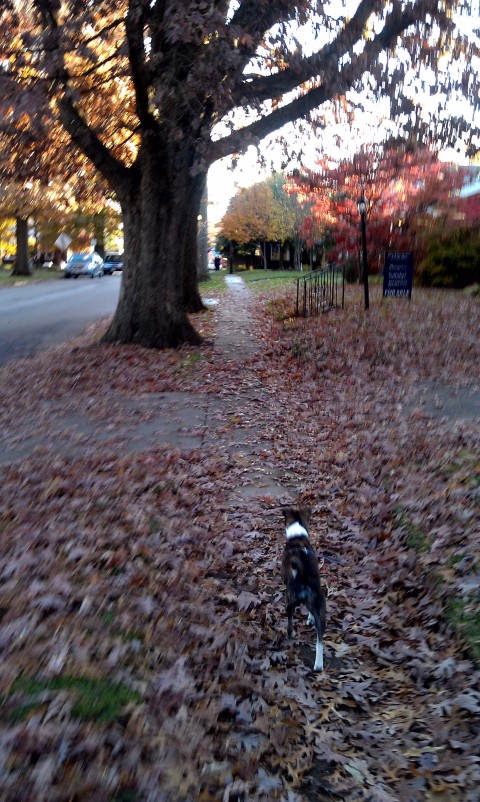 {cruisin the hood with spikeman}

Morning glories next to the squash and zinnias in the tomatoes.  Makes for a colorful garden.

Speaking of tomatoes, we are overflowing with them, and they have been enormous and delicious (Paul is on a mission to can some tomato sauce…I’ll let you know how that goes).  But we have had issues with our veggies getting eaten by bugs and small animals.  Yesterday I came across this:

This tomato is bigger than my fist, and that is no small bite.  My first reaction was holy crap, that is a big animal that’s eating our produce…a possum maybe?  Meth rat?  And then…

Figures.  I guess it’s a lot easier than stealing his favorite baby carrots from the fridge.

I remember this day and specifically this ride largely because, despite my father’s best efforts to convince her it would be a great time (which it obviously was), my mother refused to get on the camel.

Happy Father’s Day to the best Dad ever.