…at USC.  We’re moving to LA.  Text from my sister: “You’ll get to live the life of Lauren Conrad!”  Thank god for a super icy winter and the Y and keeping up with Real Housewives of Beverly Hills.  At least I’ll know what to say at cocktail parties.  Maybe, if I’m really lucky, HH will be discovered at one of these cocktail parties and I can become the next Dina Lohan.

UK beat Wichita State in a big fat upset yesterday.  This means that not only is my (and everyone else’s) bracket completely effed, but Kentucky plays Louisville this coming Friday.  If you forget why this is a very big deal, see: here.

Neeeeerleeeeeens.  Because we are moving to a concrete jungle, we’ve decided that Nerlens would probably be happier staying here in Kentucky at Andrea’s farm.  It was a hard decision.  Nerlens is part of our family and Spike will be very upset.  But really, he’s a Kentucky cat.   He needs a place to hunt rats and climb trees and roll in dirt.  Plus nobody in LA will pronounce his name right. 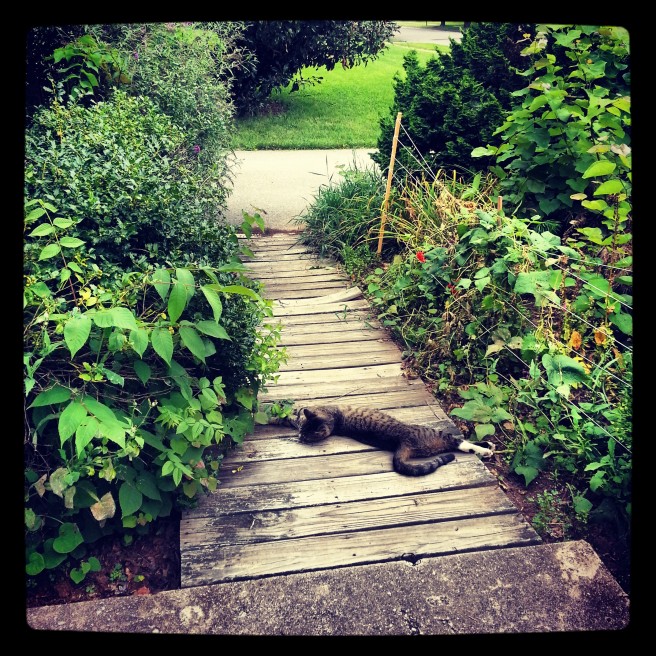 Few things drive Spike crazier than seeing Nerlens sprawled out in his favorite spot on our front walkway from his perch in the front window.  They are (in order of ascending levels of hysteria): a UPS truck parked anywhere on the street; any cat (or squirrel) other than Nerlens lying on the front walk; and the mailman.

Our doors may not be closing completely because the wood is swollen, I may have almost killed myself sliding down the ramp in our yard because it is covered in moss, and Nerlens may have spent the last week making a racket on the back porch because he was confined to sitting under the overhang…but all this rain has been good for something:

Surprise!  Our heirloom tomatoes are orange this year.  At least they’re not all tiny deformed roma.  One of the perks of taking random plants from the in-laws.

I know that doesn’t look like a whole lot of bounty, because it’s not (though, to be fair, we accidentally pulled up like 6 pre-mature radish plants before we realized they were radishes and not weeds.  Who knew the tops of radishes grew to be like 2 feet tall with flowers?)  But things this year are looking much better than things did in the brutal heat of last year.

And things been blooming kind of consistently, in a staggered way for some reason.  So we’re having a steady stream of veggies.

Next: learn how to cook turnips.  Because Paul planted like 30 of them.

…and the excitement continues…

Say hello to my new best friend (not Nerlens, though he’s up there.)

I came home from work one day to an enormous box waiting for me in the living room.  What the f, you might ask, is that?  A pregnancy pillow.  From my mother in law and sister in law.

At first I was like, woah.  Overkill.  Then I laid down in it…and have been wondering ever since how I lived without one.  It’s like a body pillow that hugs you back.   These should not just be reserved for pregnancy.  And it has been super helpful since I started getting pretty bad lower back pain this past week (hello, third trimester).  So despite its appearance, much to Paul’s chagrin, this is where it lives now. 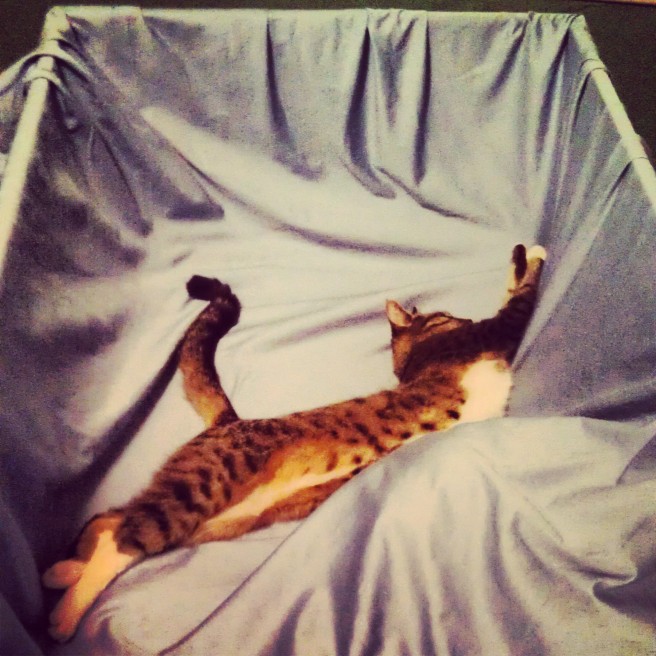 Somebody loves the crib.

You may have noticed a certain topic that kind of dominated this blog last spring has been conspicuously absent this year (see: here, here, here…)

Kentucky got off to kind of a rough start this year, but by mid-season had really started to pull themselves together and play like rockstars.  Then, in one unfortunate incident, things came crashing down.

Because about a month ago, Nerlens… 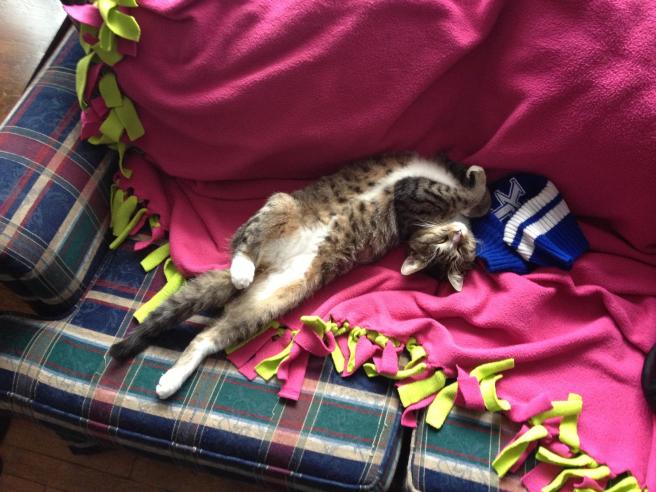 I know, that is so gross, I almost didn’t post it.  But for those of you out there who are unfamiliar with basic human anatomy, he really messed up his knee.  Tore his ACL.  And at the same time, the soul of Kentucky.  Right in half.

I love the camera man’s face in that picture.

And last week, it was finalized.  Kentucky didn’t even make the tournament this year. 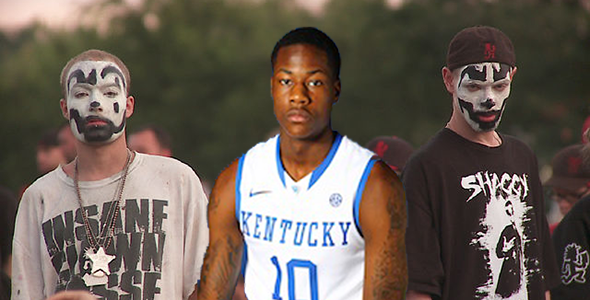 (I have no idea where that picture came from).

And so, while UK sits in mourning, and Louisville continues onto the tourney as the #1 overall seed (which is absolutely KILLING Paul), and the people of Lexington drown their sorrows in bourbon, talk of next year’s recruiting classes for both basketball AND football (?!?) is already flitting through the air giving the Wildcat Nation a thread of hope to cling to in this time of dire straits. 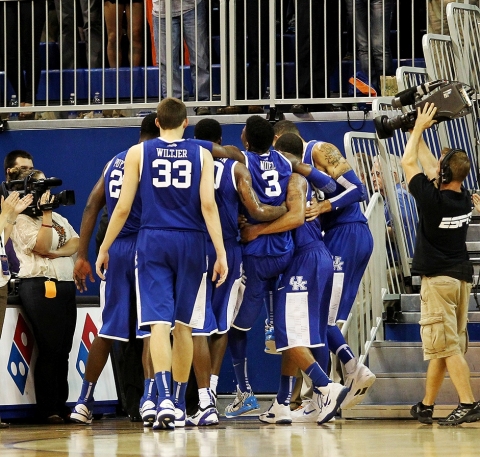 Guess who overcome their differences for Thanksgiving.

Just trying to enjoy my coffee and get some work done before the game starts.

Last week I worked from home one day, and by 9am was ready to kill me some animals.

So I really love working from home every once in a while, and really appreciate that I have a boss who is cool with me doing so.  It’s nice and quiet, no office politics, change of scenery, I can open the windows and get a little breeze blowing through the house.  So pleasant.

Close both of those doors, nobody’s eating anything anymore.  The dog chases the cat.  The cat chases the dog.  I decide to lock the cat in the bathroom.  Within 3 minutes he somehow tears all of the towels off the racks, slides the rug across the room, sprays kitty litter EVERYWHERE, and breaks a shelf in the bathroom closet knocking everything on the shelf onto the floor.  Abandon that plan.  Now we’re all confined to the main section of the house.

The cat sits in my lap and the dog stands next to me barking.  I kick the cat off my lap. The dog the crawls in my lap and the cat starts batting him on the head.  I kick the dog off my lap.  The dog sits on the ground looking at me forlornly,  like “how can you let this happen to our peaceful home?” while cat walks back and forth across the keyboard sending emails that say $*%&^FJSDKJ#(ECJSLDKUWE to random work clients.

I prepare to relocate to the coffee shop down the street.

But then, very suddenly, they both crash and fall asleep, curled up on either side of me on the couch.

…and then the house was quiet, and so peaceful, with just the steady hum of the cat purring.

And you can’t help but be like, AWWWWW THEYRE SO CUTE HOW COULD I BE MAD AT THEM EVERRRRRR.

So no animal abandonment.  Yet.

Spike’s duvet is out.  We had our first frost this week.  You know what that means. 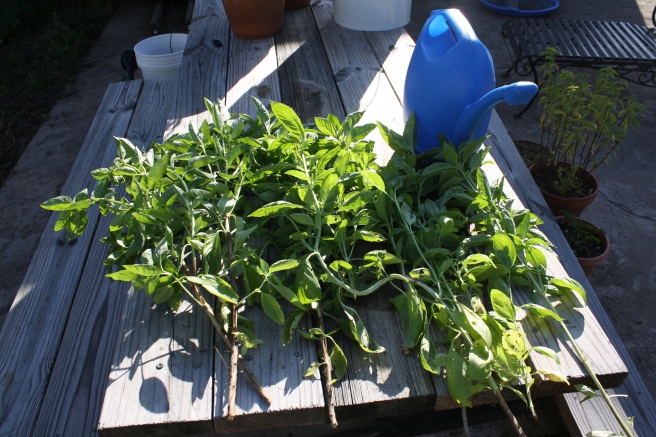 This year wasn’t a spectacular one for the garden.  I blame the extreme summer heat and, largely, neglect on my part.  But it wasn’t a total bust.

Things that took off this year:

The basil.  Holy cow, the basil.  Granted, we did start out with quite a few basil plants.

All of those tiny squares along the left side are little basil plants.  Like the edamame of last year, Paul planted basil in pretty much any empty patch of dirt he could find around on our property.  Unlike the edamame, these plants did not get run over with a lawnmower.  And they EXPLODED.  Big beautiful leaves.  We put it on everything.

Anyway, enough about the basil.  Next up:

Compared to our other crops, tomatoes did relatively well.  We got a few batches of about 30 tomatoes, though they were all pint-sized, misshapen Roma.  Oh well, lesson learned.  Next year we need better variety.

Other herbs that survived include the rosemary:

And, comeback herb of the year goes to… 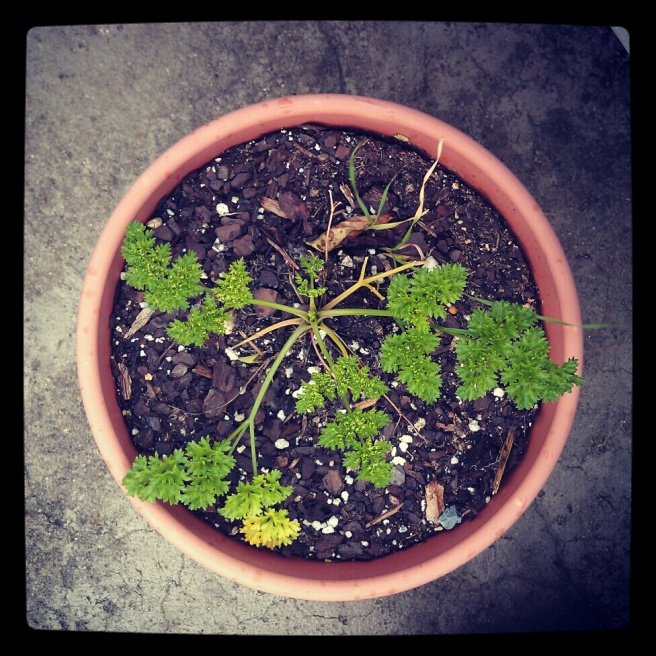 PARSLEY!  I know it doesn’t look like much, but you should see what he looked like in August.  Way to go, buddy.

Finally we have the beets. 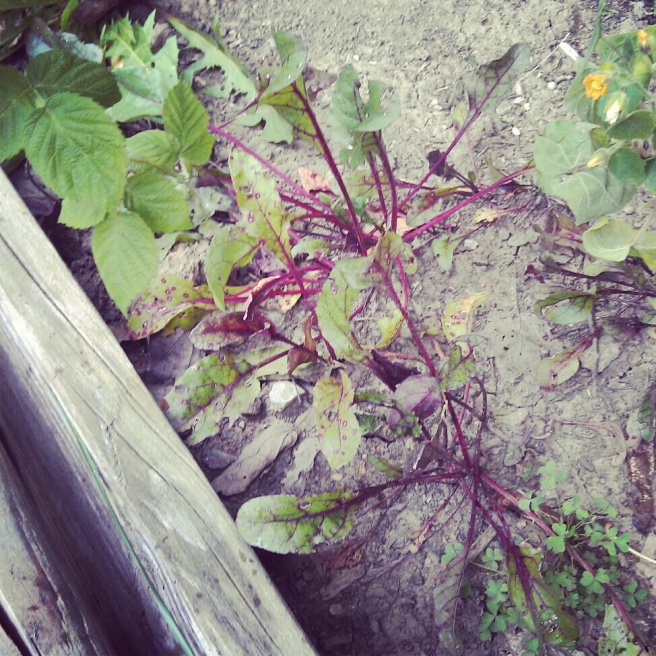 Though these were ready to go last year in July, we haven’t given up hope yet. 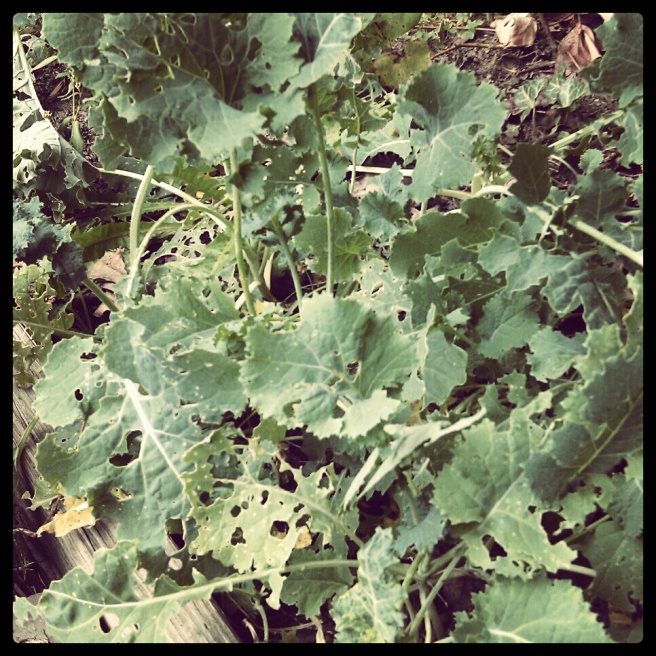 Kale fail.  Something is eating it.  Our cilantro, string beans, and like 3 kinds of peppers that we planted all met an early death as well.

And, of course, our lawn corn.

It grew taller but, much to Paul’s chagrin, stopped at that height and has yet to produce any corn.   Again.  Corn Fail #2.

The oregano and rosemary is relocating to inside the house for the winter, with the hopes that it’ll get enough sun and Nerlens won’t eat them (he’s already started eating the small tree we have growing by the front window.) 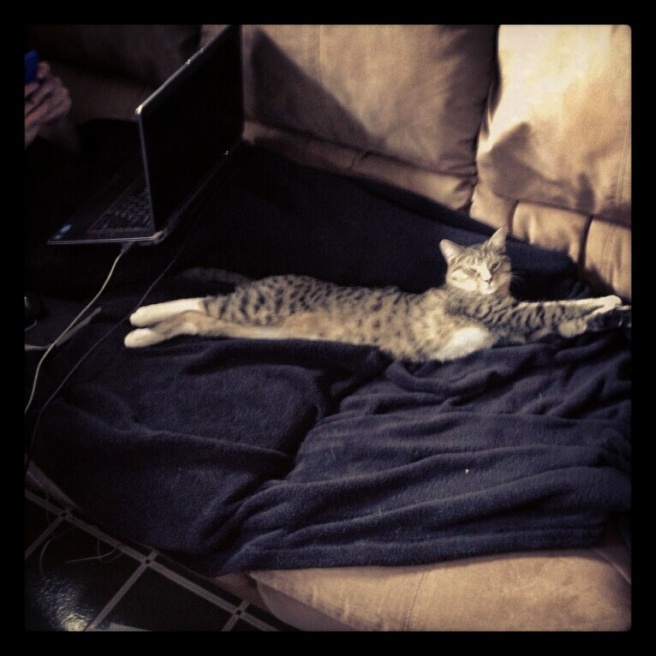 Next year we’ll give the veggies a little more love.