(Both from Romy.  We’ll see what tomorrow’s is.)

If we were being accurate, this should probably be called Coop Drama: Part 2,395,698.  It never ends.

First up, please take a moment to admire the newly summer-ized coop. 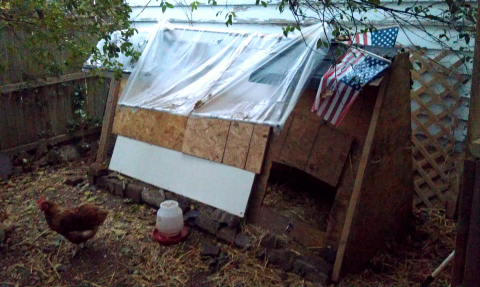 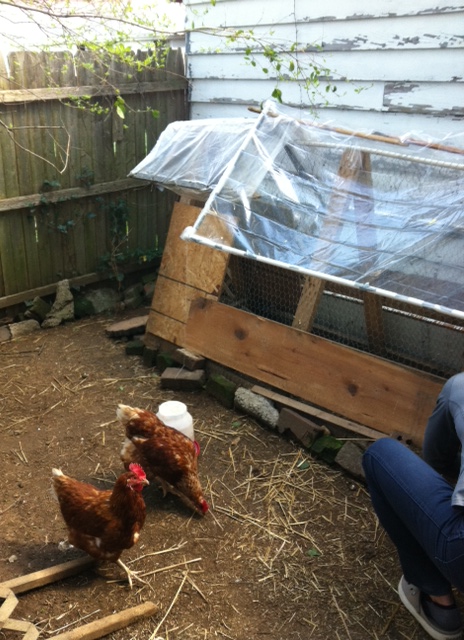 We left some of the wood on there to keep the inside, namely the food area, dry during storms.  So far so good.

Now. For about 2 months we had really solid egg production again.  We were even getting some MONSTERS.

eggs from 3 weeks ago

Then, gradually, the soft and really thin shells started coming again.  Like, so thin you’d reach in to pick the egg up and it would collapse in your hand.  And while the chickens weren’t actively eating the eggs regularly, when they fell and broke they were starting to again.

Our chickens sleep this way: 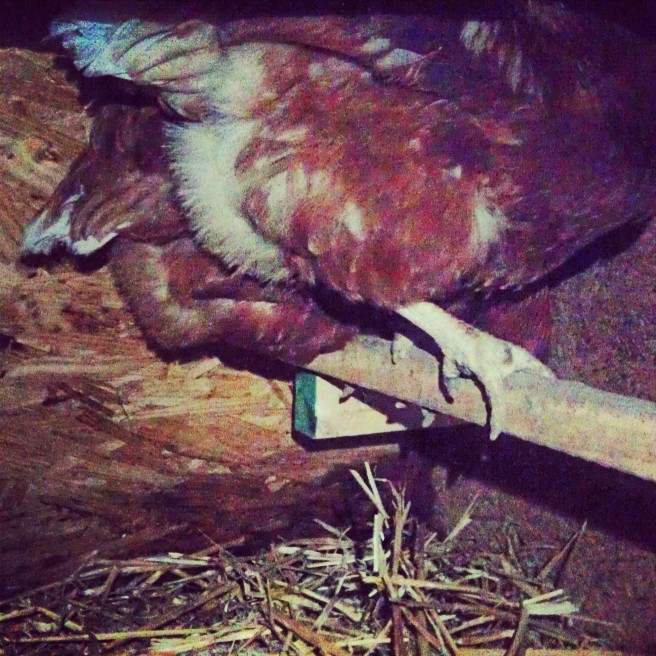 This is problematic for the eating-your-own-egg issue, because they jump down and the egg is right there for them, buffet style.

So, attempt #1: build a ramp to place under their butts, slanting down towards the back of the coop, so that when the chickens lay from the perch the egg rolls down where they aren’t really visible and or readily available for eating.  Simple.

So we built a ramp.  Next step: padding for the ramp.  We went looking for plastic nesting pads, as seen here: 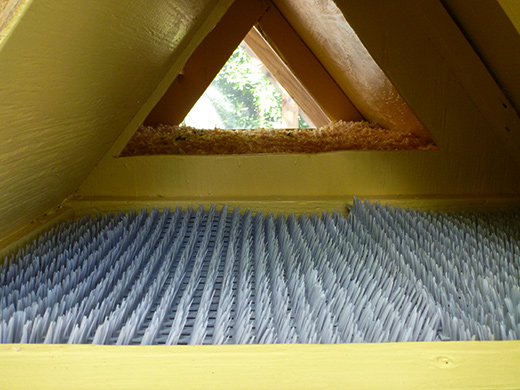 These are nice because you can hose them down (for all the turds) and chickens eat EVERYTHING…but they can’t really peck this type of plastic off of the ground (like they can, and will, with astroturf or other types of fake grass).

Unfortunately, for some bizarre reason, you can’t find this anywhere in Lexington.  Lowe’s, Southern States, Home Depot, the local farming store…nowhere.  Have to order it online.  What?  We live in KENTUCKY.  Add it to the list.

Anyway, Paul found the next best option the he thought the chickens wouldn’t eat: some sort of dried grass/hay like padding.   So we padded the ramp… 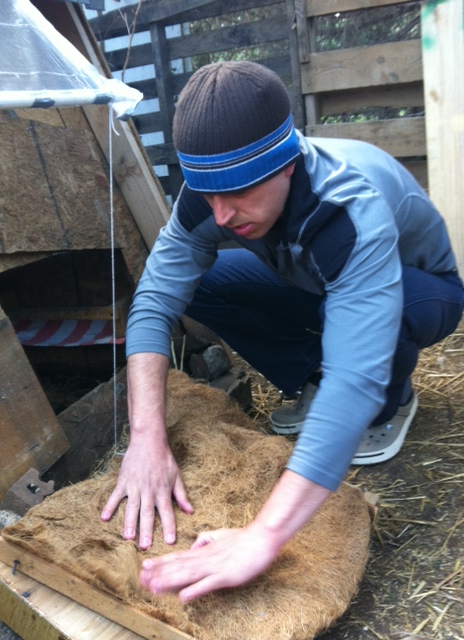 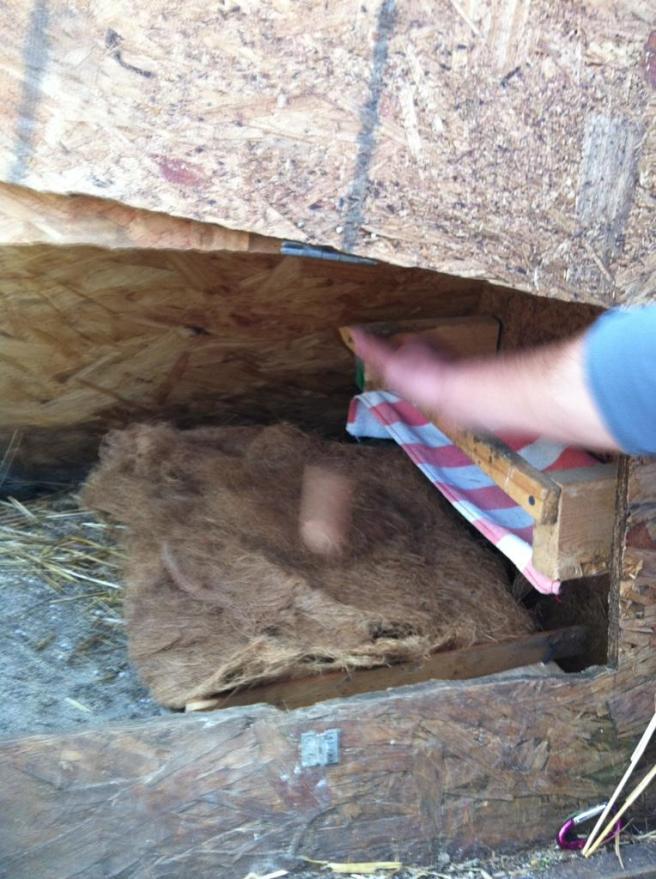 …and voila!  Beautiful, padded, egg-drop safe ramp…that the chickens promptly went in and destroyed.  They used their massive talons and totally tore up the padding.  The first egg that landed on it broke and didn’t go anywhere.

Back to the drawing board.

The ladies have decided to start laying normal eggs again.  For the most part.  I think they’re liking the (slightly) warmer weather and sun coming up at 7 instead of 8.

Then we got this.

Interesting.  And kind of normal.  It has a shell (albeit partially deformed and discolored) and has not been eaten.  I’ll take it. 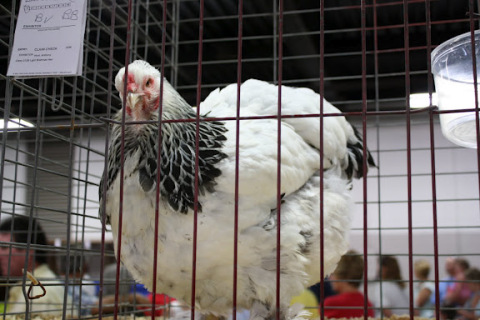 A few days ago, after a week of successes with the new penthouse, I went out back to let the chickens out and found one of them pecking at something inside the coop.  At first I thought she was just eating her own turds (weird and gross), but upon further inspection realized that it was actually an egg.  With no shell.

I scooped up the gelatinous lump with a very obvious yolk in the middle with my little shovel and, after a lot of gagging, threw it in the trash.  I then got online to make sure that what I had found was actually what I thought it was.

During this process I learned way more about the chicken reproductive system than I ever really wanted to know.

But I also found out that these shell-less eggs, aka “rubber eggs”, do in fact exist.

There were numerous reports of shell-less eggs showing up in both chickens that are beginning their laying cycle (younger chickens) and those who are ending it (older chickens). It can also be caused by stress, poor nutrition, or a calcium, phosophorous, or vitamin D deficiency.

I also learned that some people EAT THESE COAGULATED BLOBS.  They’re like, “Oh yeah, just throw it in some boiling water and let it boil like a normal egg.”

While I’m really hoping our chickens aren’t getting towards the end of their laying cycle, the general consensus across chicken forums seemed to be: don’t freak if it only happens occasionally, because sometimes it just happens.  And so far, for us, it’s only happened once.

Just when you thought (hoped) that the chicken posts were done for the season…here comes a doozy.

I walked back there prepared, as I have been every morning since we got them, to find two chicken carcasses, victim of the UGLY AS SIN possum that has been hanging out in our yard.

Pretty sure it’s this guy.

Instead I found the two of them, still alive, happily sitting in their coop…MUNCHING ON THEIR OWN EGG AGAIN.

So, there are a few reasons why chickens might actively eat their eggs, including protein or calcium deficiencies, not enough water in the coop, and boredom (seriously).  In our case, it’s most likely none of the above, but rather an issue of not providing enough cushioning for the eggs early on, so they’d break upon landing.

When you google “chickens eating their own eggs”, the A#1 most common suggestion is: prevent it from starting altogether, because “if this (habit) goes on too long, it will be nearly impossible to break”.   Wonderful.  Obviously too late for that.

Next most common suggestion, after asserting that chickens don’t naturally eat their eggs and blaming the problem on “poor husbandry or management practices” (pfft), most poultry forums state that it’s generally only one or two chickens in the flock that are the culprits, and highly encourage you cull the problem chicken(s) (I had to look up what that meant.)

Well.  We only have 2 chickens.  No culling happening here. 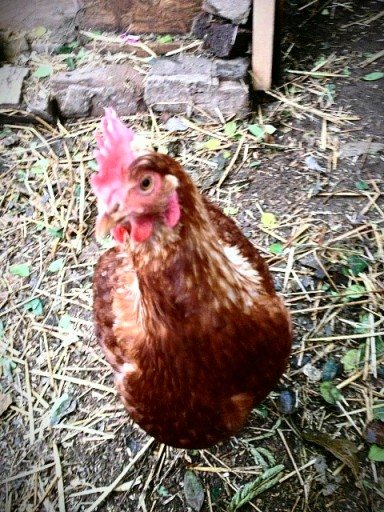 A little more poking around the interwebs led me to Ten Steps for How To Keep Chickens from Eating Their Own Eggs…which was actually only 3 steps when you took into account the fact that our chickens are a.) already eating their eggs, and b.) should be getting plenty of protein and calcium in their diet (we feed them spinach and other leafy greens regularly, as well as protein-fortified feed…though maybe we will start throwing in some oyster eggshell supplements to help).

I really wanted to go for the last one, but it required pretty precise timing.  And I didn’t know if French’s mustard would work (English mustard?  Wtf?)

We already do #1, but that schedule is dictated by working hours.  So not a lot of flexibility there.

So #2 it was!  We went out and found ourselves some golf balls.

We also decided to add some additional protected nesting space outside of the coop, since many sites recommend you provide plenty of nesting boxes “at least two feet off the ground and at least four feet from the roosts”.  Our “flock” is so small that generally speaking, so long as we keep providing clean straw, nesting space has not been an issue for us.  But all of the nests we provided were on the ground (which may be why they started laying from their perches in the coop where they sleep?)  Plus the eggs laid in the coop seem to be the only eggs they go after.  So, more encouragement to lay outside.

And so, Paul built this:

That’s from the chicken’s perspective.  In reality:

A sky high penthouse.  The really hilarious thing is that Michelle (the one you can see inside the box) literally ran up the ladder and got to work making a nest as soon as Paul finished it.

Paul is on a soft boiled egg kick.

Fortunately, we have this hand-crocheted egg warmer shaped like a chicken (a wedding gift from Paul’s German aunt, she made them), boiled egg holders, and special spoons to scoop the eggs out of the shell.  So at least we were properly equipped when his craving kicked in.

We also happen to be overflowing with eggs (anyone local interested in some fresh eggs, let me know.)  Romy and Michelle are UNSTOPPABLE.

…and for your enjoyment, the best way to peel a hard boiled egg, courtesy of Tim Ferris.