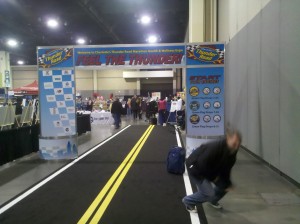 Colleague and I traveled down to Charlotte, NC…home of Bank of America, bars that don’t open on the weekends, the NASCAR Hall of Fame, and Carolina barbecue void…to run our half marathon this past weekend.  After hitting up the expo (above) and carbo-loading the night before (beer, fried pickles with ranch, and gravy cheese fries) we woke up the next morning rarin’ to go…and promptly missed the start of the race.  Along with about 1,000 other people.  But we followed the mad crush and it eventually carried us across the starting line at the very rear of the group.  We were off!

…and then we were stuck behind everyone who made it to the starting line on time, including all the walkers.  Because we started so far back, the first 6 miles were exceptionally crowded and consisted of a lot of dodging and passing.  But, when it was all said and done, we were both well under 2 hours and right on our best times.   The fried pickles did their job.

After a shower we headed out in search of some real Carolina barbecue, something we had been looking forward to for months.  We found the Tourism Center downtown and asked where we could get some.  Blank stare from the lady who works there.  Apparently it doesn’t exist in Charlotte.  But we ended up finding an awesome soul food place that also served beer and red velvet cake.   So.  Happy. 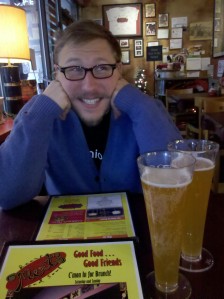 After more fried goodness, we went looking for a bar where we could relax and talk about how awesome we are and how weird it is that Charlotte has no barbecue.  We were surprised once again to find that almost all of the bars in town are closed on the weekend.  What. 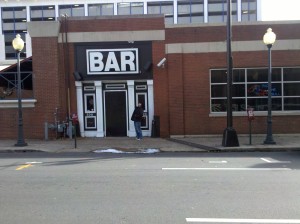 We finally found one that was open…and stayed there for 5 hours.  Until we both went home and fell asleep at 7pm.  Thanks to the snow storm in the middle of the country the trip home was a nightmare for both of us, but I’ll spare you my rant about a 12 hour wait in the airport and Colleague’s 3-hour train ride to Raleigh because apparently there were no flights out of Charlotte to Boston.

Overall:  success!  More or less.  Disappointments included the barbecue situation, not getting to go to the Dale Earnhardt Jr bar, and lack of revving engine noises broadcast over loudspeakers throughout the race (though they did play a really loud, prolonged one at the start.)

Next up: Marathon.  Probably.  (And probably another half before that.)