Paul put a little addition on the chicken coop.

Aaaah, rain.  It is raining this morning.  We got a few afternoon storms mid-week and the heat finally started to mellow out, thank goodness.  Without our usual rain everything was starting to get all brown and parched…and look a lot like California.  I was worried the garden wasn’t going to make it.  Our flowers out front are dried husks of what they used to be.

So sad and ugly.  That used to be a beautiful big blue delphinia bush.  Some of the herbs took a serious beating from the heat too, especially the cilantro.

Our back lawn is brown, which is gross.  And the chickens eggs the past few days have been smaller than usual, which is weird, so I’m blaming that on the weather too.

Speaking of the chickens, the whole time we’ve had them they have laid their eggs in their respective places: Romy is usually in the corner in a nest, and Michelle has been laying them from her perch in the coop.  Yesterday morning I went out and found this:

But not all is lost in our garden.  The basils and oregano are hanging in there.

…and of course, the tomatoes.  We had our first real harvest the other day. 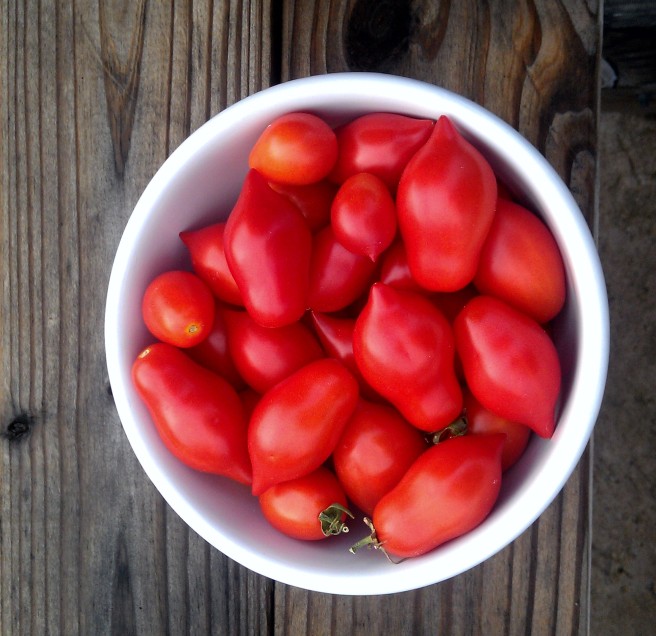 They’re still small and they have a seriously weird shape with a pointy end, but they are tasty.  And the Kentucky Colonel mint is kickin ass and taking names.  That stuff grows like a weed.  And with the rain scheduled to hang around this weekend, I’m hoping by next week things will start to perk up again.

This weekend we continue 2012: Year of the Airplane.  Tonight Paul and I are hopping on a flight…TOGETHER…out to CA.  He is done with boards (but his scores don’t come back till next week…so don’t bring it up) and we are spending a week at my parents place where my plans consist of laying in the sun and eating avocados.

But first, off to U of L to take a final for an online class I’ve been taking. Don’t be too jealous.