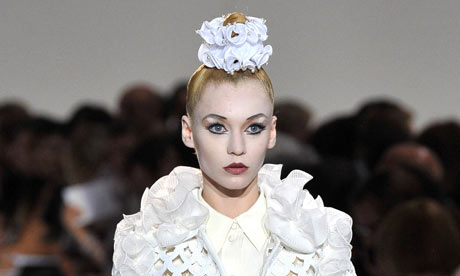 When you swim you spend a lot of time staring at the bottom of a pool.  Turns out there are quite a few things down there.  You have your hairballs, bandaids, pennies, leaves, an occasional quarter…just general debris.  At practice on Friday there was something (I’m pretty sure it was a piece of plastic tangled in some leaves and sticks) sitting about 3 yards from the wall in the deep end, and every time I swam over it I’d see it out of the corner of my eye and be like, “OMG A TINY SWORDFISH HEAD!” because out of the corner of your eye, that’s what it looked like.

A few weeks ago I saw a scrunchie on the bottom of the pool.

It was also in the deep end, and during my first pass I thought, “Maybe I mis-saw.” But sure enough, on the second pass I confirmed: a navy blue scrunchie.

This was confusing on a number of levels.  I spent the next who knows how long envisioning various scenarios as to how a scrunchie could have ended up on the bottom of a pool this close to Hollywood.  Was it a tourist who accidentally thew it into the pool while shaking out her towel?   Or maybe someone threw it in the pool over the fence as a joke, and it landed in the pool.  But wouldn’t a scrunchie float for a while?  At least long enough for someone to pull it out?  Or maybe someone saw their friend wearing it and, in a moment of horror, threw it in the pool intentionally because (to channel Carrie Bradshaw) no respectable woman in LA would be caught dead wearing a scrunchie.

This entire internal exchange took a while and pretty accurately captures the excitement that is lap swim.

So I came home and, in trying to find a decent version the SATC scrunchie scene (which I could not), came across a four-part lecture on the scrunchie.   In addition to the lecturer questioning whether the scrunchie was, in it’s hayday, a symbol of the new world order, “embodying the qualities that made American capitalism so successful: adaptability, energy, and ruthless practicality,” he also reminds the audience that while the scrunchie may no longer experience the same following it once did, because of these qualities (aesthetics, practicality) the scrunchie is still popular among gymnasts and equestrian competitors.  Good point.  Maybe it was an equestrian professional at the pool that forgot she was wearing a bun and just dove in. 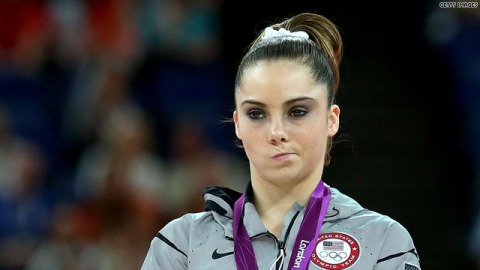 I also learned that there was a scrunchie present at the fall of the Berlin Wall, and that Rommy Revson, the inventor of the scrunchie, is still a kajillionaire.

Then last week, while sitting at the DMV, I saw no less than 3 SCRUNCHIES being worn on the head of (presumably) LA residents.  I would never have noticed before.  Diversity abounds in this great city.

…and this, my friends, is just another lesson as to how the seemingly solitary act of swimming can open your eyes to things you didn’t even know you needed to know in the big wide world around you.

You are currently reading Scrunchie at Rambulatory Ambulatory.