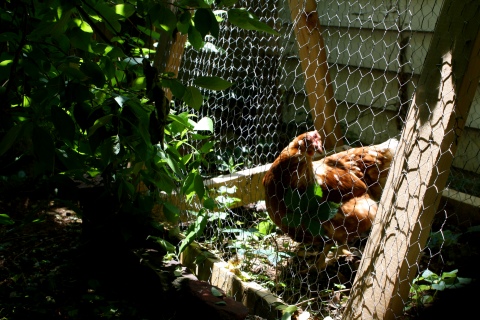 By now you’re most likely familiar with the chicken coop.

We had built it with two perches: one high, one low.  Turns out Michele really liked sleeping on the higher perch, while Romy prefers the lower.

Michele would also lay her eggs first thing in the morning from up there.  And often times, despite our best efforts to avoid this by piling hay underneath the perches, the egg would land on the hard ground and break open.   And, if the shell cracked open far enough, they would eat it.

Recently, though, the chickens have realized that they can actually peck through the shell if it isn’t already broken and enjoy eating what would otherwise be their own young.

In addition to the fact that the only reason we have chickens is to produce eggs for US to eat, this is gross.  It needs to stop.

The good news is the chickens are dumb enough that they don’t realize that the other egg that Romy lays in the corner of the coop is also an egg, and they leave that one alone.  And based on the fact they regularly try to run through the chicken wire that surrounds their coop to get to their food, even though they’ve had to walk through the door every day multiple times a day for the past 5 months, we figured their long-term memory can’t be that stellar.

And so we concluded that all we needed to do was prevent them from eating the egg laid in the coop for a few days in a row and they’d forget that they liked eating eggs at all.  And our problem would be solved.

We considered putting a net under the high perch to catch the egg, but I had images of a chicken trying to jump up to the perch and getting caught in the net and finding a strangled chicken dangling one morning.  No go.

This weekend we nailed a piece of plywood over the top perch, completely blocking off the second level, and filled the above cavity with straw, simultaneously preventing anyone from laying off the top perch AND providing additional insulation for winter.  Boom.

We also ripped out the old perch and put in a longer, stronger, better bottom perch for the two of them to share. 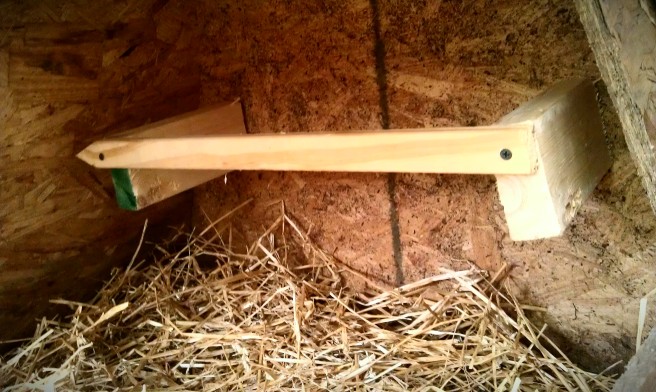 Paul went out there this morning and found both of them huddled together on it.  He also managed to rescue the un-broken egg before they got up and tried to eat it.

2 thoughts on “Living with Cannibals”