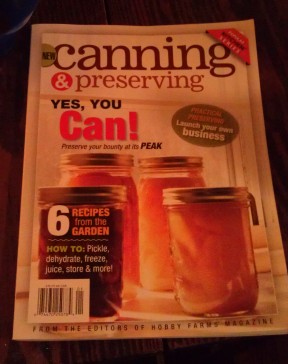 And…we did.  Another exciting Friday night at our house.

I came home from work a few weeks ago to veggies, jars, and vinegar on the counter, samurai movies on TV…

…and Paul having a great time.

When he was in Costa Rica this past July the mother of the house where he was staying made this special chili (I’m blanking on the name…basically some sort of pickled onions and peppers) to put on their gallo pinto.  Paul was obsessed.   So, of course, it was the first thing he tried to can.

A little history: Paul had attempted to make kimchi when we lived in San Francisco, and it was one of the more disgusting experiments I’ve ever had the opportunity to witness.  So I was/am skeptical.

ANYWAY!  How does it work?

First, get a magazine or book like above (I found that at Meijer) devoted to the art of canning and preserves.  You will also need a big pot: 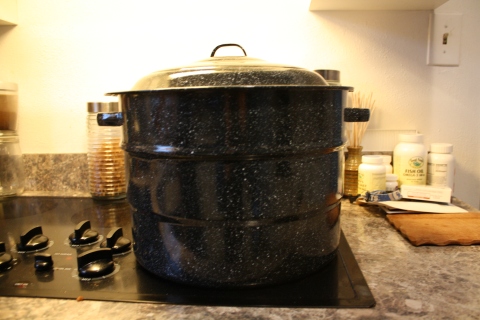 Some mason jars (which you can reuse):

Metal screw bands (which you can also reuse) and lids (which need to be new): 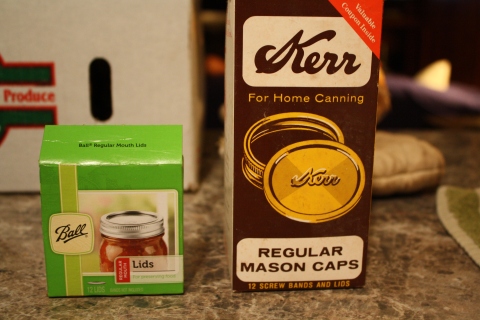 And a special pair of tongs to pick up the jars (note: all of this stuff, except for the lids, came in a canning kit I found at the local hardware store.)

Wash the jars and the lids, fill the big pot with water and bring it to a boil.

Fill the jars with whatever it is you’re canning (in this case, chopped carrots, onions, a few types of peppers, and vinegar…jams are a lot more complicated than just slicing and pouring), screw on the lids nice and tight and use the tongs to place the cans into the big pot of boiling water.

And let the jars sterilize:

After about 5-10 minutes (depending on the size of the jar), take them out of the pot and let them cool off for a few hours.  This is where all the excitement happens: you can hear the jars suctioning shut as they cool.  Paaar-tay.

After that, they’re done!

…and, in this case, ready to sit for a while while they ferment.   Ta da!  Some sort of chili to put on beans.

§ One Response to YES YOU CAN!

You are currently reading YES YOU CAN! at Rambulatory Ambulatory.